In yesterday’s post, I used newly released Census population estimates for 2015 to show that suburban counties are growing faster than urban counties, and by a widening margin. In that post I noted that “… many counties, especially large counties, include both urban and suburban neighborhoods. …  Other data sources with greater geographic detail confirm that population growth is generally faster in suburban than urban neighborhoods, though not uniformly.” This follow-up post provides a closer look at trends in where Americans live, using much more detailed neighborhood data.

To track the trend in urban versus suburban (and rural) living, I looked at the share of U.S. households that live in Census tracts with different densities. For 1990, 2000, and 2010, I calculated the density, in households per square mile, in each Census tract, from the full-count decennial Census. (Neighborhood density is the best predictor of whether someone describes where they live as urban, suburban, or rural. An alternative method is to look at distance from the city center, but I like that measure less: for instance, three miles in one direction from downtown might be a lot more urban than three miles in the other direction; also, some metros are much more urban than others – which means, for instance, three miles from midtown Manhattan is much more urban than two miles from downtown Charlotte.)

In previous work, I showed that people in neighborhoods with at least 2,213 households per square mile typically consider their neighborhood to be urban; neighborhood density of 102-2,213 is perceived to be suburban, and less than 102 is rural.  Accordingly, I divided Census tracts into categories at those density breakpoints, and then added a few arbitrary breakpoints for additional granularity, for a total of eight categories.

Then, for each Census year, I calculated the percentage of households living in each density category for the U.S. overall. In addition to 1990, 2000, and 2010, I used tract-level household estimates from the 2014 five-year American Community Survey as a more recent datapoint, though the ACS counts are estimates and reflect an average of the five years from 2010 to 2014, whereas the decennial Census data are full household counts at a single point in time. (For the 2014 ACS estimates, I used tract densities calculated from the 2010 decennial Census.) 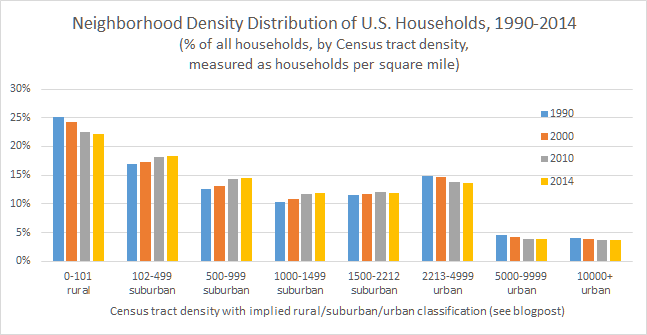 Time for all the usual caveats. First: this analysis shows the broad national trend, but there are always some places – specific neighborhoods or even metros overall – that buck the national trend. Second: the composition of neighborhoods matters, not just the total number of people who live there. Some demographic groups – such as young adults with college degrees – have indeed become more urban. That group has been important in shaping a narrative about urbanization, but they are the exception, not the norm. Third: where people live isn’t necessarily what they “want.” The cost and availability of housing matter, too, which in turn is shaped by land-use regulations, housing subsidies, and other public policies. Suburban population growth, by itself, doesn’t prove that demand for suburban living is increasing — just as rising urban prices, by themselves, don’t prove that demand for urban living is increasing. And, fourth: from a policy perspective, it doesn’t matter so much whether cities are winning. Public policies that affect location decisions (like the mortgage interest deduction, or parking policies) should be based on externalities that arise from where people live, not on trends in where people are moving.

With those caveats, the main point is that America is becoming more suburban. Both up-to-date annual county population estimates (yesterday’s post) and neighborhood data that’s less current and less frequent (this post) show that same trend. While it is important to remember that, in theory, county-level analysis could give a misleading picture of overall urban and suburban population trends, it is also important to know that, in fact, it does not.