Local population growth trends are reverting to pre-2000 patterns as the housing bubble and its aftermath recede.

Today the Census Bureau released its 2015 population estimates for counties and metropolitan areas. After volatile swings in growth patterns during last decade’s housing bubble and bust, long-term trends are reasserting themselves. Population is growing faster in the South and West than in the Northeast and Midwest, and faster in suburban areas than in urban counties; both of these trends accelerated in 2015. Before getting deeper into these broad patterns, though, let’s start with the metros that saw the fastest growth and steepest declines in the past year.

The Villages – a small metropolitan area near Orlando with lots of retirees – led all metros in population growth. Six of the ten fastest growing metros in 2015 were in Florida and Texas, while none were in the Midwest or Northeast.

Note the presence of oil towns on these lists. Houston was among the ten fastest growing large metros, and Midland and Odessa, TX, were among the fastest growing of all metros. Two other places with an energy boom – Williston and Dickinson, ND, were the fastest-growing “micropolitan” areas in the country. These Census population estimates are as of July 1 of each year, so the 2015 data are actually a snapshot from almost nine months ago. It’s highly likely that population growth has slowed in energy-producing areas since July 2015: more recent jobs data have shown that falling oil prices hurt energy-sector employment.

One last point about the fastest-growing metros: 2015 is the first year since 2010 when Austin was not in the top spot among large metros. Cape Coral – Fort Myers, which bumped Austin out in 2015, was also the leader in the bubble years of 2004-2006.

Now for the other extreme. Of the 381 metropolitan areas, 96 lost population in 2015 while 285 gained. Those with the steepest declines were all smaller metros, including several with military bases, spanning most regions of the country except the far West.

Among larger metros, 13 lost population in 2015 while 91 gained. The ten with the steepest declines were all in Ohio, Pennsylvania, upstate New York, and Connecticut.

Youngstown had the sharpest losses among large metros for the past six years and for 11 of the past 15 years. Metro Detroit had the biggest losses in 2008 and 2009; in 2015 Detroit was 14th from the bottom among large metros, with a growth rate of just 0.01%.  New Orleans had the steepest population decline of all large metros in 2006 thanks to Hurricane Katrina (the 2006 data reflects the year leading up to July 1, 2006, which includes when Katrina hit in August 2005). The early 2000s tech bust put San Jose at the bottom in 2002.

Population Trends Favor the Sunbelt and the Suburbs

The lists of the fastest and slowing growing metros hint at general patterns in recent population growth. Looking at all counties in the U.S. – not just those in metropolitan areas – reveals three trends. 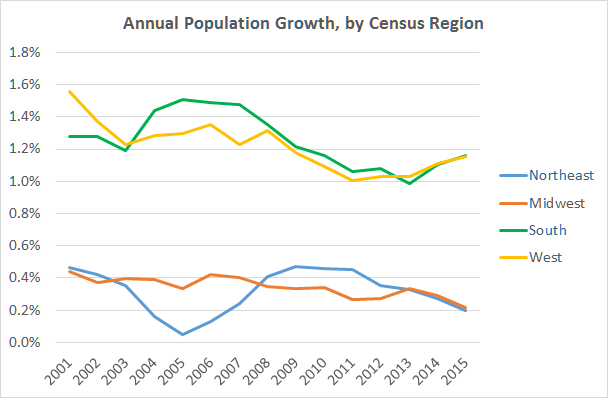 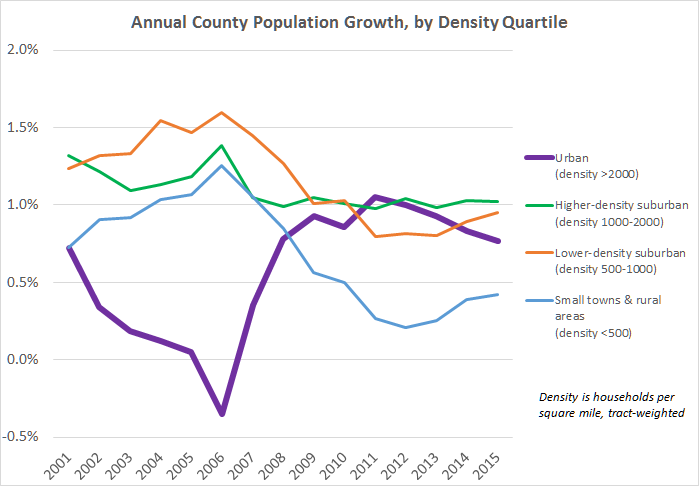 The third trend is that metropolitan areas with at least one million people grew faster in 2015 than midsize and smaller metros did, just as in every year since 2008. While this is a reversal of the bubble years in the early 2000s, when midsize metros grew faster, it is a return to the pre-bubble pattern: in the 1980s and 1990s, as in the post-2008 period, population growth was faster in million-plus metros than in midsize metros, smaller metros, and non-metropolitan areas. (Micropolitan areas counted as metros in this analysis.) 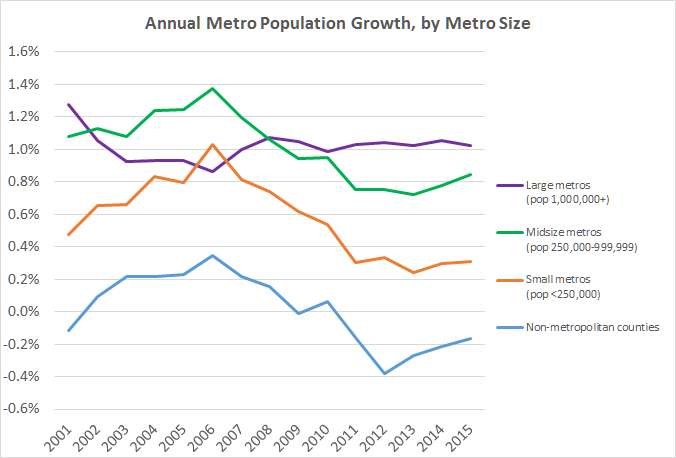 The Longer View: Population Trends Are Getting Back to Old Patterns

Since 2000 population trends have reflected the housing boom, bust, and recovery. The boom, lasting until 2006, favored the suburbs, where most new single-family homes were built (or overbuilt). Then, in the housing bust, patterns reversed, with urban counties and large metros rebounding while suburban and rural growth slowed. Now, as the recovery continues, old patterns – from before the 2000s – are returning.

For starters, compare population growth in metros by the severity of their local housing bust. In the hardest-hit metros, where prices climbed during the bubble and then fell 30% or more, population growth slowed dramatically from 2006 to 2009. Note that population in these metros started to slow before the bubble reached its height in 2006, as rising prices hurt affordability, and continued when the bubble burst as people lost their homes and local job markets suffered. In contrast, in metros with a relatively mild housing bust (price declines of 15% or less), population growth accelerated in 2007-2009: their economies held up better in the recession than the hardest-hit metros did. But since 2011, the metros with the severest housing bust have once again had the fastest population growth, and their lead over metros that had a moderate or mild bust has grown. Lower housing prices and stabilized local economies have attracted people back to metros that suffered the worst. In five of the ten large metros with the fastest population growth in 2015 (the four Florida metros plus Las Vegas, as shown above) home prices fell more than 45% in the housing bust. 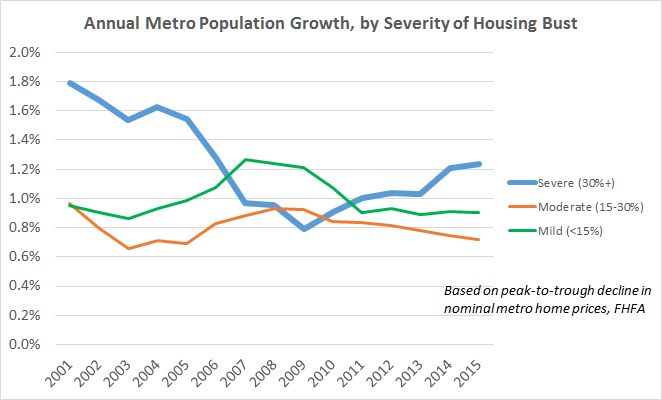 As local population patterns look more like the pre-bubble period, with accelerating growth in the suburbs and the Sunbelt, it becomes clearer that some of the population shifts during the housing bubble and bust were temporary and reflected the extreme housing cycle. In particular, the acceleration of population growth in the Northeast in 2009-2011 and moment when urban growth surpassed suburban growth in 2011 look like reactions to a housing bubble that brought unsustainable growth to the suburbs and the Sunbelt. That’s not to say that nothing has changed: there have been dramatic shifts since the pre-bubble years in the composition of local populations. College-educated young adults are much more likely to live in high-density urban neighborhoods than they used to, while seniors are increasingly likely to remain in suburban single-family homes. But, in aggregate, local population growth in 2015 looks ever more like it used to before the housing bubble, with the Sunbelt and the suburbs widening their leads.