White men, older adults, and the less educated are more likely work in occupations that are projected to shrink.

Americans say they are anxious about the economy. In the Gallup poll of economic confidence, Americans are more pessimistic than optimistic today, as they have been throughout nearly all of the economic recovery. Large threats loom. International trade — and the “China shock” in particular — has hurt jobs and wages in exposed industries and local markets. Robots are another worry, with estimates of the share of US jobs at risk of being automated ranging from 9% to 47%. Economic anxiety jumped around 2008, more for Whites than for Hispanics or African-Americans. In the presidential election campaign, Donald Trump’s call to “Make America Great Again” is, in part, an appeal to voters concerned about their economic future. (See note on data and methodology at end of post.) 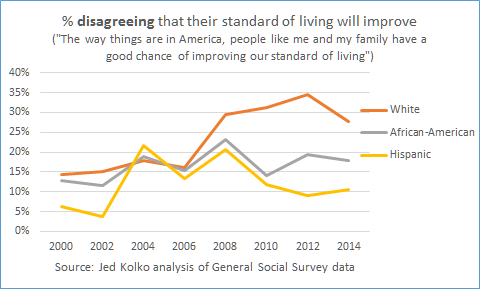 But is this economic anxiety wholly justified? Although there are serious red flags — like low labor force participation among less-educated men and unemployment spells lasting longer — most economic indicators look upbeat. Payrolls have been expanding for years, the unemployment rate is back in pre-recession range (or at least getting closer, even for broader unemployment measures like U-6), and wage growth has improved. Although Hispanics and African-Americans, as well as younger adults generally, are doing worse economically — as measured by current unemployment, income, wealth, or the impact of the Great Recession — they are not the people who are most anxious about the economy nor are Trump’s strongest supporters, who tend to be Whiter and older. In fact, a recent analysis of Gallup polling data found that support for Trump was stronger among people with higher incomes, holding other factors constant, with “less strictly economic measures of social status” being better predictors of viewing Trump favorably.

Yet it turns out that the groups most anxious about the economy — and most in support of Trump — tend to be in jobs that are at greater risk of disappearing. White men, older adults, and the less educated are more likely than other groups to work in occupations that are projected to shrink.

The Most At-Risk Occupations

This debate over who should be anxious about the economy usually starts with income and unemployment rates. There’s no question: these are natural and essential measures of economic well-being. But these measures are not the whole story. Economic anxiety can also reflect expectations about the future, how the economy is changing, and whether one can adapt to those changes. Concerns about automation and globalization are particularly sharp because they reflect deep economic shifts, rather than temporary, cyclical swings. Jobs that get automated or competed away might never come back, and workers who once held those jobs might find their skills have become obsolete. Furthermore, since occupations are often clustered geographically, workers in at-risk occupations might worry not only about their own prospects but also about their neighbors, friends, customers, and home values. People who work in occupations that might fade or disappear would understandably be anxious about the economy.

Which jobs are most at risk? The Bureau of Labor Statistics (BLS) makes projections about employment changes over the next ten years, covering hundreds of specific occupations across all broad categories. Among broad categories, BLS expects job losses in production (that is, manufacturing) and farming, forestry, and fishing jobs between 2014 and 2024, whereas the fastest growing categories are health-care related.

Not all shrinking occupations are blue-collar jobs: the economy is changing in ways that go well beyond “the end of brawn.” Many service-sector occupations are projected to shrink: the BLS predicts big drops in employment for bookkeepers and accountants, fast food cooks, and mail carriers, for example. In fact, because manufacturing and agricultural employment as a share of the overall job market have plummeted in past decades, most of the shrinking occupations are now service jobs: 57% of the jobs in shrinking occupations are in services, while just 33% are production and repair jobs and 9% are in farming, fishing, or hunting. Furthermore, occupations expected to shrink include some high-paying jobs like nuclear technicians, air traffic controllers, and, perhaps surprisingly, computer programmers (though other computer-related occupations, like software developers, database administrators, and network architects, are expected to grow).

Which Demographic Groups Are in Shrinking Occupations? 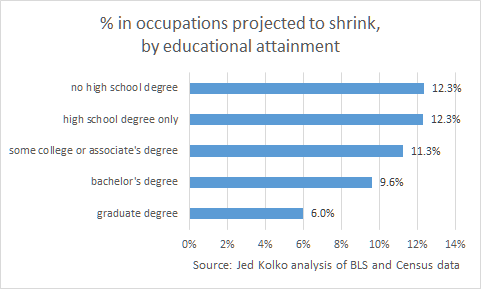 For age, unlike for education, those most likely to work in shrinking occupations are NOT the groups with higher unemployment and lower incomes. Older adults are more likely to be in shrinking occupations than younger adults — 12.6% for 55-64 year-olds versus 9.3% for 25-34 year-olds — despite younger adults generally having higher unemployment rates and lower incomes than older working-age adults. 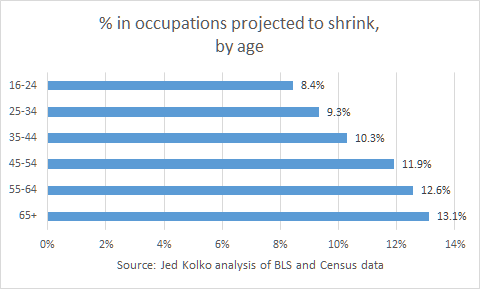 Excluding farming, forestry, and fishing jobs — which are projected to shrink and are disproportionately Hispanic — the share of workers in shrinking occupations is highest for White men, by a statistically significant margin, and lowest for African-American and Hispanic women. (Combining sexes, the share in shrinking occupations is highest for Whites when farming, fishing, and forestry jobs are excluded. The difference between Whites and Asians is small but statistically significant.)

Therefore, even though Whites and Asians have both higher incomes and lower unemployment than African-Americans and Hispanics, and White men are overrepresented in positions of power and privilege — sometimes vastly so — in most fields, White men are disproportionately likely to be in shrinking occupations. Among White men who are older (55-plus) and less educated (high school degree or less), 15.3% are in occupations projected to shrink, which is 42% above the national average of 10.7%.

Does this all mean that women, young adults, and African-Americans are all doing better in the labor market than men, older adults, and Whites because they’re less likely to work in shrinking occupations? Of course not: income, wealth, and having a job today are critical for economic well-being, and on these measures African-Americans and Hispanics are, on average, behind.

The point is that economic anxiety could arise for many reasons. No single measure gives the full picture of economic anxiety. Those who are better off by straightforward measures of average income or unemployment rates may be in occupations more likely to shrink. Economic anxiety is more understandable and justified – and deserves to be taken more seriously – when we consider the possibility and consequences that occupations can shrink and, eventually, even disappear.

This analysis draws primarily on two datasets: the Bureau of Labor Statistics’ (BLS) Occupational Employment Projections for 2014-2024 (published in December 2015), and the Census Bureau’s American Community Survey (ACS) Public Use Microdata Sample for 2012, 2013, and 2014. Occupation-level projections from BLS were matched with individuals’ occupations in the ACS. To create a consistent set of occupational categories, some occupations in the BLS projections were combined. ACS data were downloaded at IPUMS-USA, University of Minnesota, www.ipums.org.

More information about the General Social Survey (GSS) is here. The Hispanic sample of the GSS changed in 2006. Differences in economic anxiety between Whites and other groups are statistically significant starting in 2008. A separate regression analysis using GSS data revealed that working in a shrinking occupation is negatively correlated with the expectation that standard of living will improve, even when controlling for age, race/ethnicity, sex, education, income, and nativity; the effect is statistically significant.

Throughout this post, racial and ethnic categories are defined to be mutually exclusive, so that Whites, African-Americans, and Asians are non-Hispanics only. These categories were recoded from the original Census data, which asks about Hispanic ethnicity separately from race, such that Hispanics can identify as any race. Asians include Pacific Islanders.