The aging of the U.S. population will drive demand for health-care jobs, and nearly one-quarter of the American workforce in ten years will be 55 or older.

The latest employment projections from the Bureau of Labor Statistics reveal the effect of the aging population on both labor demand and labor supply. These projections, updated every two years, were released this morning and provide a comprehensive view of how the labor market might change over the next decade. I’ll be looking at these and related data as part of a new research project with Bloomberg Beta.

The fastest growing and declining occupations 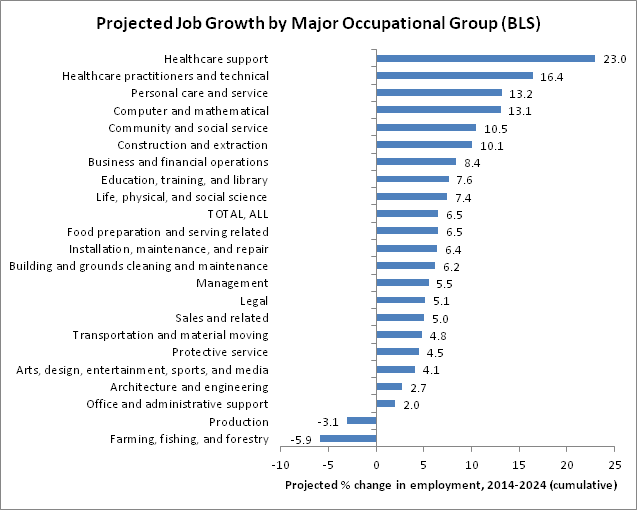 At a more detailed level, the fastest-growing occupations are mostly health-related, led by large increases in physical therapy, occupational therapy, and nursing. Tailwinds are strong for wind turbine service technicians — whose ranks are expected to double — and the numbers are adding up for statisticians, too.

The fastest-declining occupations include many that produce or transport physical goods, including locomotive firers. Plus, modern communication technologies continue to displace mail-processing, telephone, and switchboard operators. 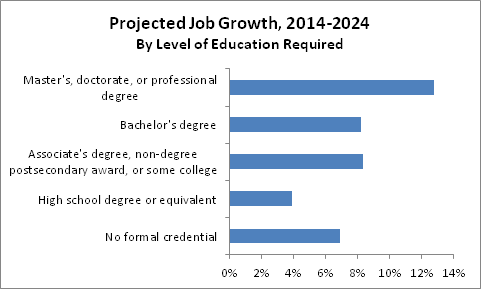 Breaking it down further, by sex and educational requirements, the slowest-growing occupations are projected to be those that require a high school degree and are traditionally male — including many production (i.e. manufacturing) occupations. Employment in those occupations is projected to grow just 3.0% over ten years — less than one-fourth the growth rate of female-majority occupations requiring a master’s, doctorate, or professional degree.

Just as the aging population will change the types of jobs we’ll need, the workforce itself will age. Two trends will work together to make this happen. First, of course, is that baby boomers will be aging into their 60s and 70s. The number of adults 55+ is projected to increase 21% between 2014 and 2024. In contrast, the number of 25-54 year-olds — the “prime working-age population” — is projected to increase just 4% over the same period, despite the large number of young millennials (age 20-24) moving into prime working age. 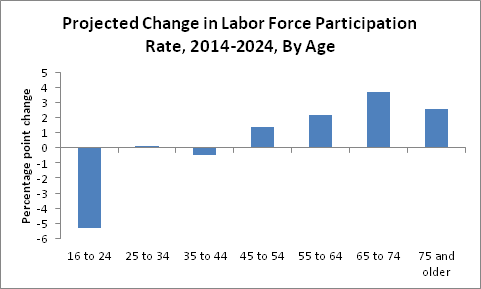 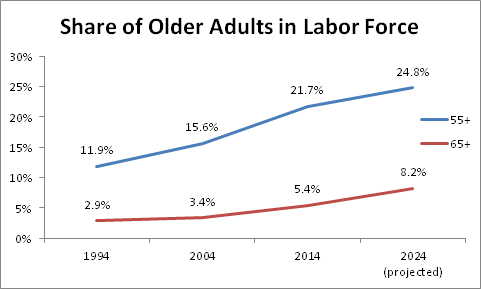 These projections reveal the significant impact the aging population will have on labor demand and labor supply. Health-care jobs will grow fastest, and nearly one-quarter of the labor force will be older than prime working-age (a term that might itself need to be retired). More generally, job growth will favor women and those with advanced degrees, while men with high school degrees may face the biggest labor-market challenges.

Note: all data, with the exception of the sex ratio of occupations, are from the Bureau of Labor Statistics. Sex ratio by occupation was calculated from the American Community Survey (ACS) Public Use Microdata Sample (PUMS), 2012-2014. The BLS provides more detailed occupation codes than the ACS, so in some cases the sex ratio for a broader occupation reported in the ACS was assigned to multiple, more detailed occupations reported in the BLS projections. ACS data were downloaded from IPUMS, which requests to be cited as: Steven Ruggles, Katie Genadek, Ronald Goeken, Josiah Grover, and Matthew Sobek. Integrated Public Use Microdata Series: Version 6.0 [Machine-readable database]. Minneapolis: University of Minnesota, 2015.