The Bureau of Labor Statistics just posted data on metro-level job growth for October 2015. (Their report on these data, however, won’t be published until December 7.) Two trends stand out.

First: looking at large metros — those with one million or more people — the San Jose and San Francisco areas have the fastest job growth in the country. 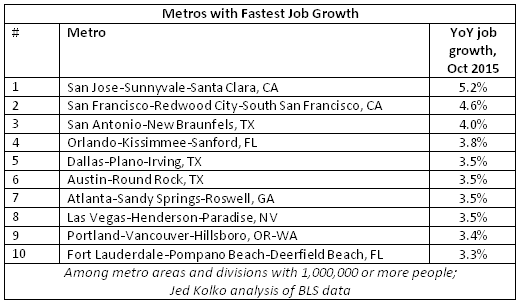 Sure, the tech industry is booming, which boosts Bay Area employment. But fast employment growth in San Jose and San Francisco is nonetheless striking because limited housing construction in the Bay Area holds back growth and adds to housing costs. (Last week, the President’s chief economist, Jason Furman, gave a speech on how land use regulations hold back local economies. And this academic paper shows how housing-supply constraints restrict growth in productive cities and hurt national economic growth.)

All of the 10 large metros with the fastest job growth were in the South and West, including several in states that suffered the worst of the housing bust.

The second notable fact is that Houston — after years of fast growth — is now among the slowest-growing large metros, hurt of course by the decline in oil prices. 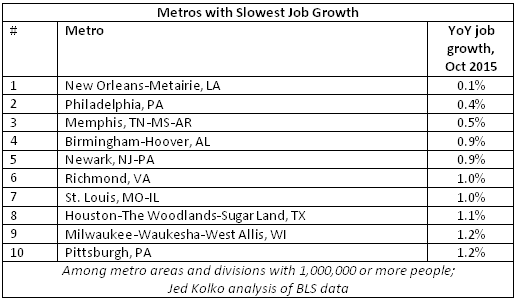 None of the slowest-growing large metros are in the West, and half are in the Northeast & Midwest.

One last point: Texas has both fast (San Antonio, Dallas, and Austin) and slow (Houston) growing metros. Texas — like other large states — is economically diverse, and it makes little sense to look at job growth, unemployment, or other economic indicators at the state level because it obscures huge differences in economic activity within the state.

Note: data shown are for metro areas and metro divisions (where defined) with one million or more people. These data are from the Bureau of Labor Statistics.